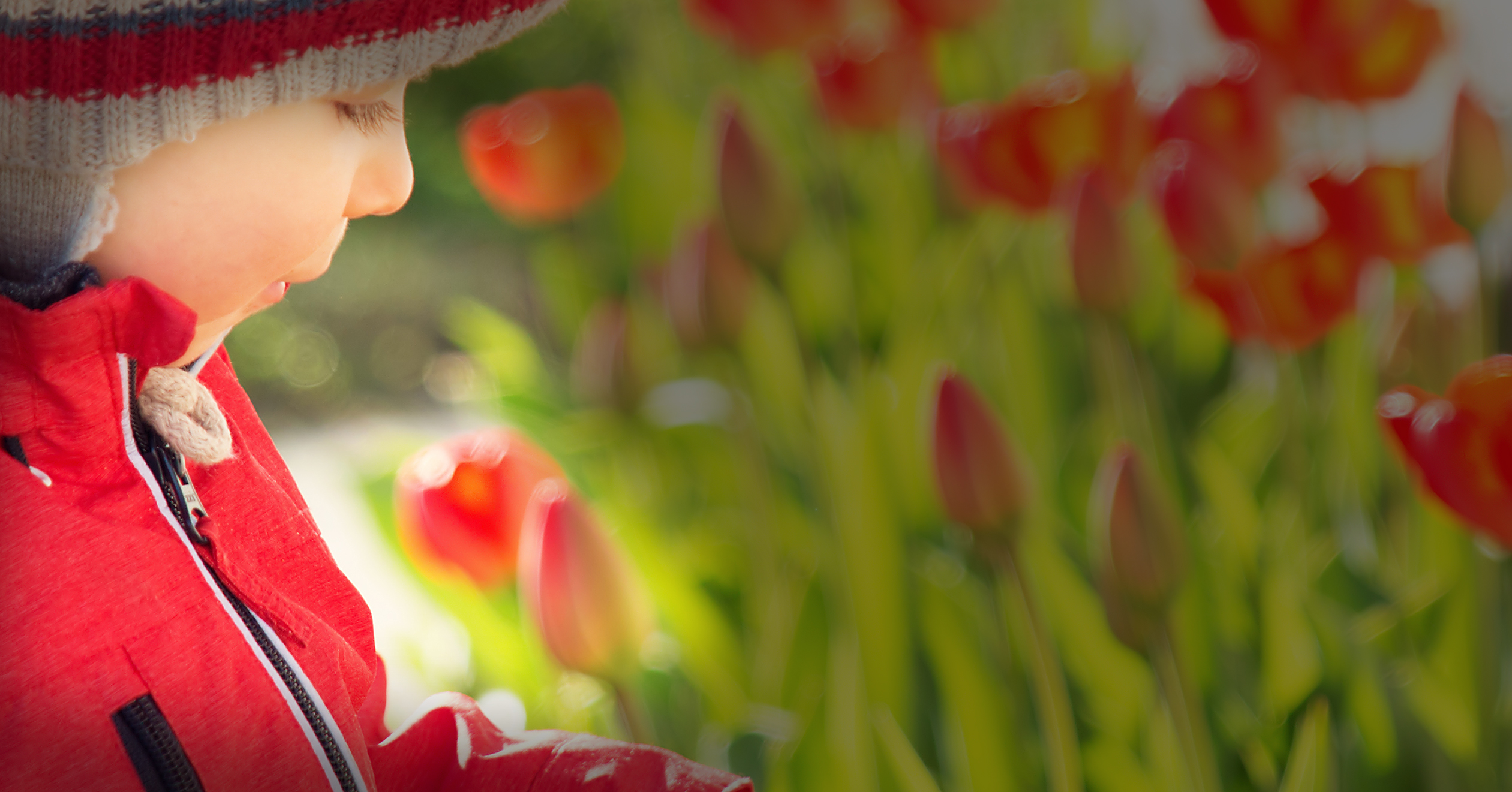 Scarlett: The Colours are Brighter

Colours Seem Brighter Through the Eyes of a Child

Recently, a reviewer of my new book “The Green Velvet Chair” described it as “a light read.” While this comment made me wince a bit, I quickly realized the stories are as light or as deep as you need them to be. This particular story, at first glance, may seem like it is about my newly born granddaughter. But if you really read it, it’s about finding hope during the grey, gloomy skies of COVID-19.

After years of waiting to become a grandma, it finally happened. My daughter and son-in-law gave birth to a beautiful baby girl in late winter. Her name is Scarlett. She has blue-eyes, dark brown hair, and an ivory complexion that glows. Upon her birth, she looked like Snow White swaddled in a soft, cream-coloured blanket. My husband and I took turns embracing her hours later in the hospital room. We both cried with joy as we held this precious gift of life—tightly wrapped in flannel and topped with a bow of thick hair.

Flashback Over Twenty Years Earlier
I have always been a working mother. With a degree in visual communication, I embraced my career as a designer and worked for many large firms over the years. But as my two daughters grew and advanced through grade school, it became important for me to be there when they got home. They were growing up so fast and becoming more and more independent. I thought this would be the perfect time for me to bring more balance to my career and family life—and work for myself.

So, I started a small design company called BluBrown Communications. It wasn’t too difficult to come up with the name. My older daughter had blue eyes and my younger daughter had brown eyes. My vision was to look at the world of art and design through the eyes of a child—always asking “why.” BluBrown also represented “blue sky thinking with feet firmly planted on the ground.”

When I was prospecting for clients, I would tell them this story and it stuck. People could relate to it. BluBrown also became my mantra to always look at every design challenge through fresh eyes. Why don’t we turn this upside down? Why don’t we look at this project from a different perspective? Why? Why? Why?

My creativity was flowing, and I felt my work was getting stronger with each project.

Working for myself also allowed me to attend my daughters’ sports events and extracurricular activities. Previously, I would never think of leaving my downtown office at 3:00 in the afternoon to attend a basketball game or Girl Guide event. By being my own boss, I could do whatever I chose to do. At times, this meant I would have to work later that night, but it was worth it.

I had always worked hard in the corporate world and blending family and work life made me work even harder. Having said that, it was great to be around when my kids got home from school—their stories of the day were fresh in their minds, and I was there to listen. Our little family was closer than ever, and my little company was keeping me very busy, too. I was fulfilled as a mother and a designer. Long-term clients and interesting projects gave me stability and satisfaction. My children gave me joy and inspiration.

Needless to say, years have passed, and my daughters have grown up, earned degrees, and started successful careers of their own. In fact, they both work in the design and communication field, which amazes me. My younger daughter went to the Alberta University of the Arts (like me), attained a degree in visual communication (also, like me), and works in the same newspaper building I had once worked in. My older daughter is a senior corporate communications leader in a large company. I couldn’t be prouder of them.

As their careers flourished, I, too, continued to keep very busy with my design work.

Then Everything Became More Intense
Scarlett was born months before the world locked down due to a global pandemic. COVID-19 had arrived, and our once vibrant world had become bleak. The skies became grey, and the world stood still for many, many months.

Once our daughter finished maternity leave and went back to work, my husband and I volunteered to provide childcare for Scarlett one day a week. In our home, we could see our new little granddaughter during the pandemic’s strict lockdowns. There was a stringent directive from the government that childcare was an essential service, so this enabled us to bond with our granddaughter and support our daughter. My husband and I both squeezed our five-day work week into four days even if it meant working later hours during the week so we could spend one day with our precious Scarlett.

I never really knew my grandmothers. Granny lived far away in Ireland, and Baba lived in another province and only spoke Ukrainian. So, I wasn’t close to them, literally or figuratively. I really wanted Scarlett to know her grandma. This time together enabled us to build a strong bond right from the beginning.

It was during these months that the sun started to shine again through the gloomy COVID clouds. Scarlett was a young toddler, just learning to walk and talk. As the weeks flew by, we saw a colourful personality emerging. She was clever and funny and liked to read books and do art. Her playful side surprised us as she teased Grandpa with red watermelon and ripe blueberries—putting them up to his mouth and then pulling them away as she giggled. Her sense of humour and joyful spirit invigorated us.

As spring arrived, we often took Scarlett to the park—a park we hadn’t visited since our own children were little—even though it was just across the street. Scarlett loved the baby swing, the small slide, and teeter totter. She was busy figuring out the lumpy grey pea-gravel texture beneath her feet. This was new and different!

On these outings, we’d frequently take a break, sit on the park bench, and just listen. We’d noticed the birds singing again. It’s been a long time since grandma and grandpa sat here and listened to the birds. We’d point to the blue sky and the green trees so Scarlett could see the beautiful flying creatures soar through the air or perch on branches. She’d mimic the black crows flying overhead and bellow “Caw, caw.”

We also noticed the Red Breasted Robins, and even the odd Blue Jay. However, she probably became the most excited from the multitude of jack rabbits that hopped through our neighbourhood. Our world opened up again to the colours, sounds, and movement of life around us.

On rainy days, Scarlett and I would sit on the living room floor by the big picture window. We’d play with toys, read books, and just snuggle. When the garbage man drove into our cul-de-sac, his truck was loud. We’d run to the window and watch the big rig as he slowly moved from house to house. Scarlett was fascinated as he picked up the trash from the neighbouring homes. When he emptied the last garbage can, he drove by our window again and tooted the horn as her nose was pressed against the glass. Scarlett waved to him, and he waved back—both of them grinning widely during the exchange. When any of the neighbours walked by or a car entered our street, Scarlett would once again run to the window, wave excitedly, and shriek, “hi, hi, hi!” She saw joy in all the activity of her small world.

We Heard the Music Again
Many years ago, my husband bought an intricately designed musical wall clock as a Christmas gift to me, during one of our trips to Palm Springs. Walking down Palm Canyon Drive, we were drawn to a soft musical sound coming from a small plaza. The harmonious chimes offered such a contrast to the hustle and bustle of the popular strip. We let our ears guide us into this charming little shop. It was filled with music boxes, wall clocks, Murano Glass, as well as a variety of sculptures and collectables—a treasure trove of all things beautiful. Immediately, we were drawn to the clock mounted on the wall behind the shopkeeper, as it played the most amazing melodies. I fell in love with it and watched and listened to it for a long time. Little did I know my husband was conspiring with the salesperson to secretly have it delivered to our home for Christmas. I was overwhelmed when I opened this thoughtful gift.

It chimed at the top of every hour and had four spinning crystals in the pendulum. Each hour the face of the clock would open up to expose three gold gears that spun as the music played. We envisioned listening to Christmas tunes being played as we sipped wine by the fireplace during cold winter nights, and we did this—for a while.

However, after a very short time, we grew irritated with the music and shut it off. I am not sure why or how, but it became annoying and distracting. The clock still kept time, but that was all it did.

When Scarlett came over, we turned it on again to see her reaction to the music and the movement. Her eyes lit up as she watched and listened to this magical clock. To our delight, it has once again become the highlight of our day. Every sixty minutes, I pick her up and race to the clock. We sway to the music and watch in amazement as the crystals rotate and the gold gear train spins. It’s funny to think we shut it off so many years earlier. She helped us hear the music again and appreciate the beauty of this gift once more.

Seeing the world through the fresh eyes (and ears) of a child is magical. I haven’t heard the birds sing in years, and certainly have never waved to the garbage man before! And sadly, I didn’t even know some of the neighbours that Scarlett waved to during her visits. But that has all changed. Life is fun and colourful and bright. Even during a challenging COVID-19 pandemic, or perhaps because of it, the little things seem so much more important.

From blue to brown to scarlet, a rainbow of colours has appeared again. Bright wax crayons are now scattered across our dining room table. Baby S and I get all mucky with the water colours, and we attempt to build things (anything) out of the jumbo-coloured LEGO blocks strewn on the living room floor. LEGO blocks have always been a challenge for me, but now I am figuring it out with my granddaughter.

Scarlett and I are now both asking “why?” Why is the sky blue? Why is a lemon yellow? Why is an apple red? Why do we have to colour within the lines?”

It’s funny, because as I started to write this chapter, I thought “Oh, this is just a silly little story about how I have learned to see the world through the eyes of a child.”

But when I finished it, I realized this may be the most important story of all!

Makin’ the Dough” is just one of the chapters in my debut book, The Green Velvet Chair: Heartfelt Stories of Art and Design in Everyday Life.

Laura Ballerini, a designer who started much of her creative journey at a big city newspaper and now owns her own digital design boutique, seamlessly weaves together an unlikely array of stories about her inspiring mother, museum visits, online shopping, designing in the dirt, and many other adventures (including a visit to Graceland).